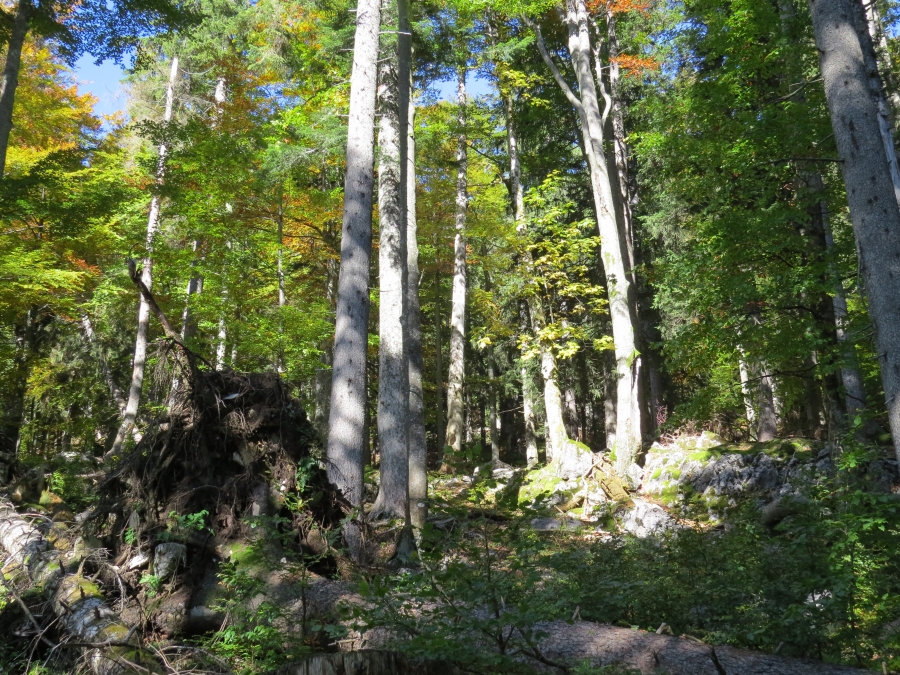 In the triangle between the National Park Kalkalpen, the National Park Gesäuse and the Dürrenstein Wilderness Area - you will find exceptional natural and near-natural forests. The Dürrenstein Wilderness Area is home to the largest remnant of primeval forest in the Alps, covering some 400 hectares. Back in 2012, the three protected areas joined forces to strengthen the ecological connectivity of the forest areas in this region - the Netzwerk Naturwald was born. Netzwerk Naturwald means Network of Natural Forests. In the meantime, the Netzwerk Naturwald has grown and the Styrian Provincial Forests, the Austrian Federal Forests, the City of Vienna with its spring protection forests in the region as well as the three nature parks Steirische Eisenwurzen, Niederösterreichische Eisenwurzen and Ötscher-Tormäuer are now partners in the Natural Forest Network.

In a spatial analysis, a search was made for remaining old grown forests that could serve as stepping stones between the protected areas in order to functionally connect the beech-dominated mixed deciduous forests and thus maintain the high biodiversity in the long term. During this analysis, some suitable areas were found even though it became apparent that old-growth forests are already rare even here. In the meantime, three pilot areas have already been permanently secured as stepping stones.

In the spatial analysis, the area southwest of the existing wilderness area already stood out in 2015 due to the old-growth forests. This has led the province of Styria to start working with the Austrian Federal Forests and the management of the Dürrenstein Wilderness Area towards a protection of these areas. The planning and negotiations were lengthy but recently the final agreement was announced. An area of about 3,500 hectares in Styria complements the existing wilderness area and doubles its previous size. The fact that it has been possible to create a new wilderness area of this size in the Alps is a sensation in itself. The fact that this has been achieved across two federal states is an even greater achievement.

It is interesting to note that here, too - as in the case of the Netzwerk Naturwald - a private initiative provided the impetus. While the Netzwerk Naturwald was initially supported by the Swiss MAVA Foundation, two Austrian entrepreneurs accompanied the expansion of the wilderness area and also provided generous financial support.

For the Netzwerk Naturwald, this expansion means a big leap forward as can be seen on the map below. A large part of the remaining old-growth forest is now protected in the enlarged wilderness area. The distance between the protected areas has thus been significantly reduced. Nothing is as important to the ecological challenges of the coming decades as old growth forests. This realization is also increasingly finding its way into European policy under the term proforestation and will probably also shape the coming funding periods for the Alpine region.

The example in the heart of Austria gives courage that even in challenging times it is possible to take big steps for nature conservation if protected areas, the public sector, landowners and committed individuals walk together. The wild heart of Austria beats powerfully and steadily.

If you would like to experience the wild heart of Austria, the lynx trail is particularly suitable for this, which winds through the region on exciting trails in 11 stages. https://luchstrail.at/

Find more information about the Netzwerk Naturwald at www.netzwerk-naturwald.at and visit the wilderness area also at www.wildnisgebiet.at !