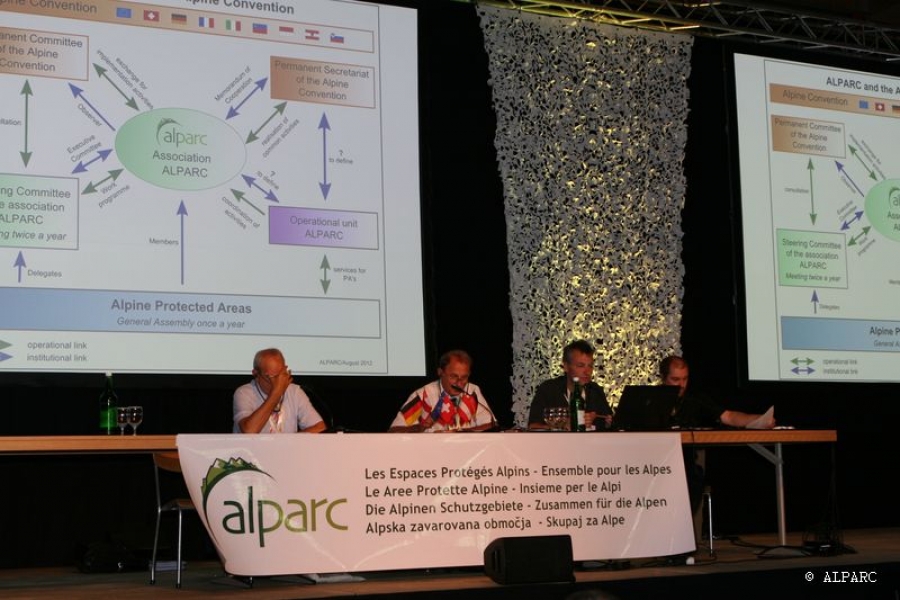 Around 50 people met on Thursday 6 and Friday 7 September 2012 at Poschiavo (CH) for the General Assembly of the ALPARC network, providing the opportunity for its president, Michael Vogel, to present the latest developments in the structure of the ALPARC network, and to initiate its transition towards a future ALPARC association.

The presentation of the new statutes of the ALPARC association

After the speech given by President Michael Vogel, in which he stressed the importance of the work of the ALPARC network in alpine international cooperation, the afternoon of Thursday 6 September was dedicated to the presentation of the new statutes for the future ALPARC association.

ALPARC needs a legal basis and structure in order to be able to implement larger shared projects, but also and above all in order to give a greater image and international weight to the protected areas of the Alps. The principal leitmotiv, however, remains the provision of concrete, efficient and grounded contributions towards the application of the Alpine Convention and its protocols, especially as regards the “Protection of nature and safeguarding of landscapes”.

Due to a first transmission of the statutes in July, all members had the possibility to present their remarks and observations. During the General Assembly, a general accordance could be found about the new ALPARC statutes. For certain countries, the entry to the new association needs to clarify administrative procedures, which should be resolved before 2013.

At the end of the discussions, the members were invited to share an Alpine aperitif and so discover and taste some of the specialities of the Alps. In the evening, they were invited to the screening of the new “For the Alpes” Multivision .

Information: ALPARC currently enjoys the support of numerous financial partners: the French ministry for Ecology, Sustainable development and Energy, the two French Alpine regions – PACA and Rhône Alpes – DATAR, the town of Chambéry, together with the German BMU ministry, the Swiss Confederation, the principalities of Monaco and Liechtenstein and the MAVA and Heidehof Foundations, as well as the European Union.

The morning of Friday 7 September was dedicated to the presentation of the actions undertaken in2011-2012 . Organised in the form of a World café, the discussion and exchanges saw the emergence of new perspectives and avenues for the actions to be effected in forthcoming years. This was followed by the presentation of the new programme of projects for the transitional year of 2013 (see below).

The afternoon of the Friday, 7 September, was marked by a common declaration from the protected areas present at the General Assembly indicating their desire to create an ALPARC – Alpine Network of Protected Areas:

“Aware of the ecological, economic and social stakes, and appealing for a better coordination and coordination of the actions implemented throughout the Alps, the protected Alpine areas and territorial communities signing the present declaration have decided to pool their reflections in order to create the ‘ALPARC – Alpine Network of Protected Areas’ association, a tool of Alpine cooperation”.

This declaration marks the first step towards the new association, which should become established in law during the course of 2013.