Gumpen am Königsbach in the Berchtesgaden National Park closed 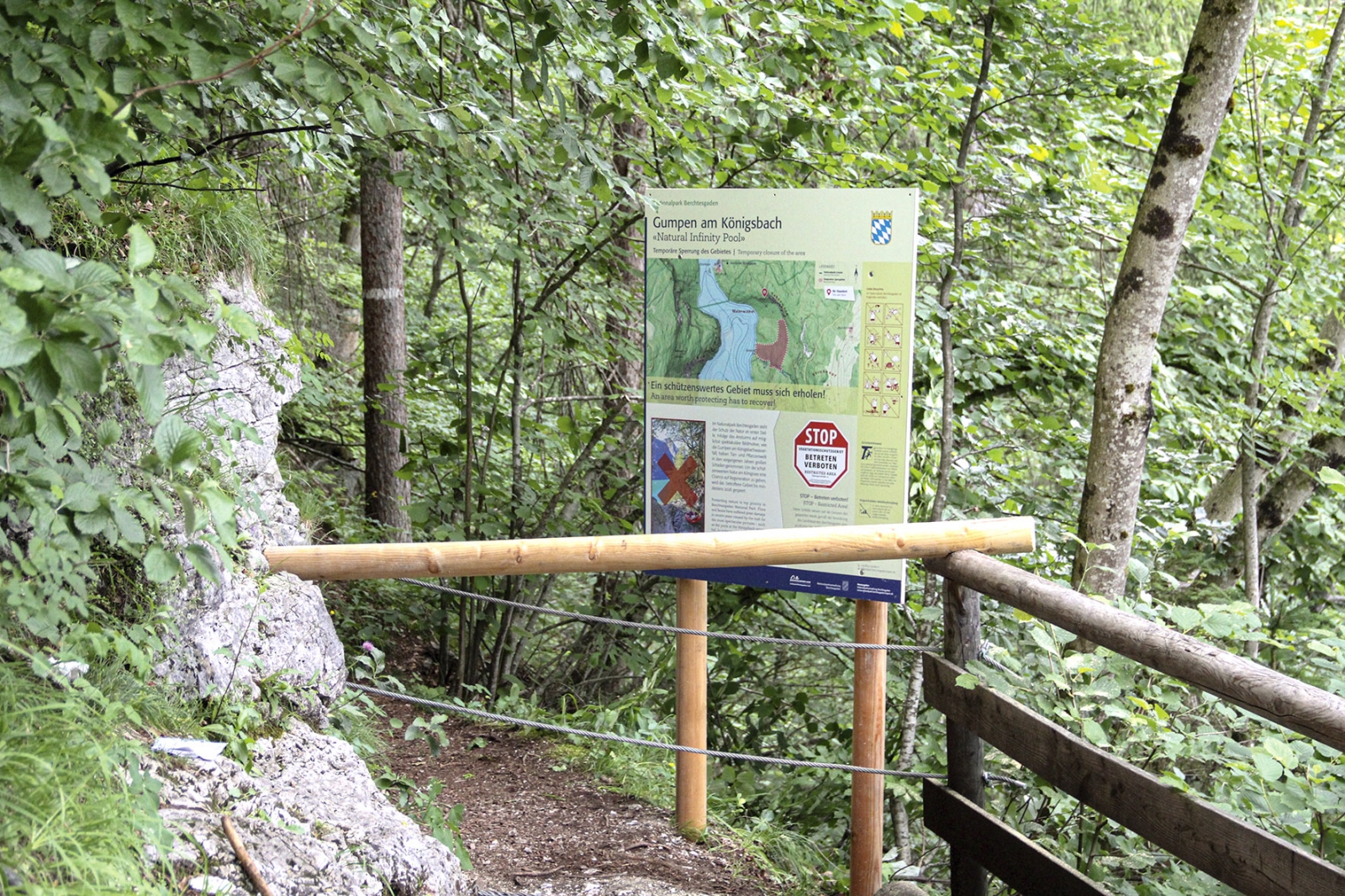 Gumpen am Königsbach in the Berchtesgaden National Park closed

Ordinance enters into force on Wednesday, 30 June 2021 – limited to five years for the time being

The so-called Infinity pool above the Königssee in the course of the Königsbach has become a world-famous visitor magnet in recent years. However, this development increasingly endangers the flora and fauna in the Berchtesgaden National Park. Therefore, after a close examination, the decision has now been made to close the area around the Gumpen for five years. This is to give nature time to recover. The regulation has entered into force on Wednesday, June 30, 2021.

With its special view on parts of the Königssee, the Gumpen in the Königsbach waterfall forms an attractive excursion destination in the Berchtesgaden National Park. While the Gumpen used to be an insider tip, in recent years they have become a tourist attraction, especially among the younger generation. In particular, the so-called infinity pool in the upper part of the waterfall cascade achieved great popularity far beyond the region via numerous posts in the social networks in a short time. The media attention inevitably led to a massive increase in visitor numbers.

Only two small paths formed the traditional access to the area around the Gumpen, which was previously only used to a small extent by locals. Due to the rapid spread in social media and on outdoor platforms, these paths are now known to a worldwide public, the number of visitors has multiplied significantly. A survey from the summer of 2020 showed an average number of about 150 visitors per day on weekends, but far more than 350 on peak days.

As a result, in recent summers, a wide-ranging network of trails with a length of at least three kilometers has newly formed. As a result, the entire area is massively disturbed – the individual paths that converge again and again are sometimes over several meters wide. Especially in the immediate area of the Gumpen, the topsoil is massively damaged due to the high visitor frequency. Due to the destruction of the vegetation, the topsoil lies free in the steep slopes and is further eroded by the mechanical load and the onset of water erosion. In many places, the fine roots of the surrounding trees are exposed over a large area.

The ordinance, which the Berchtesgadener Land District Office has issued is intended to contribute to the recovery of vegetation over the next five years as a building block in the context of visitor guidance, as well as to support the closure of the soil wounds by natural succession.

The purpose of the Berchtesgaden National Park is to protect nature. The development of the area for the population for educational and recreational purposes is always subject to the protection of nature. The prohibition to enter the areas specified in the map (annex) is, in view of the circumstances, a necessary measure to prevent further impairments. The area mainly includes those areas that are damaged by the newly created trampling paths. In total, it is about 10 ha of the area of the Berchtesgaden National Park, which covers a total area of more than 20,000 ha.

A seasonal interruption of the ban, for example for the winter months, would counteract the successes of the summer closure. Due to the often humid weather during this time, even a few visitors would be sufficient to destroy the delicately developed ground vegetation over the summer and cause corresponding (step) damage.

Five years for the recovery of vegetation

The ordinance of the District Office is initially planned for a period of five years. This period may be sufficient for the vegetation to recover and for the soil wounds to close. The time is used by the National Park Administration to evaluate the development. If it turns out that five years is not enough or that visitor pressure is back to the level it has been in the recent past, a further closure after the next five years cannot be ruled out.

Appeals to the reasonableness of the visitors and for a voluntary renunciation to enter this area have unfortunately had no effect in the past. With the ban that came into force, It is now possible to punish violations as an administrative offense. The rangers of the Berchtesgaden National Park carry out the on-site inspections and report violations to the Berchtesgadener Land District Office. There, the further processing of the fine procedure takes place.

For the Berchtesgadener Land District Office and the Berchtesgaden National Park, the closure is the last resort. Both authorities hope that this now unavoidable measure will enable nature to recover from the heavy burden of recent years. In addition, visitors and nature users, especially from the field of new media, should also be sensitized to the needs of the plant and animal world in the national park and an awareness of their protection should be awakened. This hope is also reflected in the limitation of the regulation for the next five years.

Photo: National Park employees put up the signs to close the vegetation protection area in the area (Credit: Nationalpark Berchtesgaden)