Those Responsible for Education about the Environment Motivated for Transalpine Cooperation 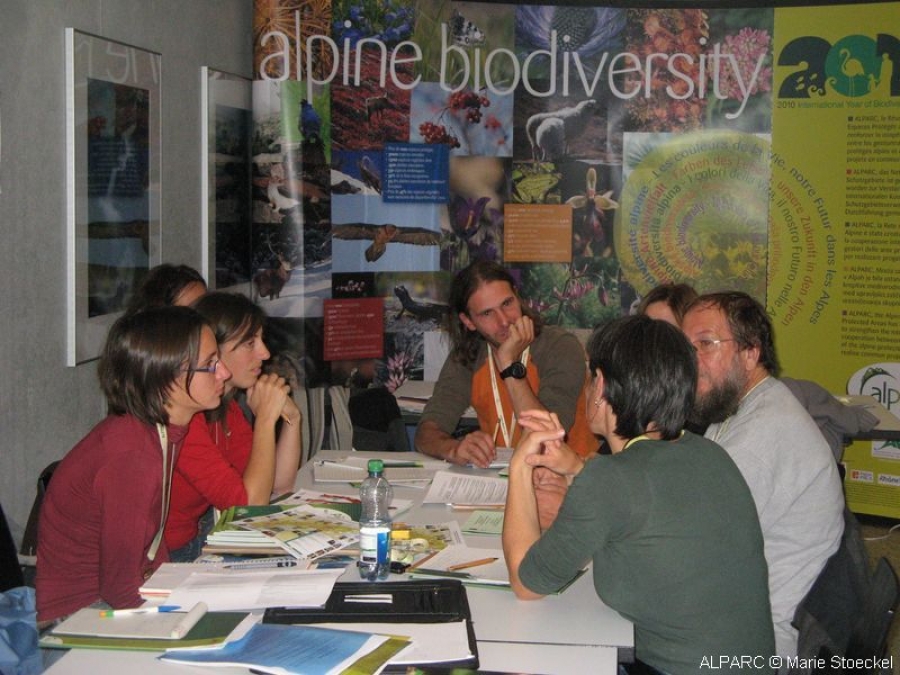 “The first time I took part in exchanges with the REEMA was at the workshop organised in Zernez during the Alparc meeting. I saw men and women responsible for education on the environment in the protected areas of the Alpine massif. They were gathered around a table and on that table, in pride of place, was an egg.

They spoke about how we need to overcome the fears and apprehensions related to nature by drawing on knowledge and positive feelings; at that point the shell began to crack. Despite language barriers they showed their desire to share their experiences and, as they opened their arms, the bird spread its wings and began to fly. Disregarding borders, it started its journey through the Alpine range, towards that which unites men and shapes the Alpine identity. If you see that bird in the Alpine skies, tell yourself that its journey has hardly begun and that each of us has the choice of deciding whether to follow it or not”...

Several people responsible for education about the environment in the various protected areas in the Alps had the opportunity of meeting for the first time for a workshop dedicated to the theme of their work on 19 and 20 October 2010 alongside the ALPARC General Assembly in the Swiss National Park .

Inscriptions poured in – proof of how important and topical this theme is- and unfortunately some delegates had to be refused (except for protected areas).

Finally 26 people looked into their profession and the possibilities for cooperation on an Alpine scale. The meeting was co-organised with the Reema (Alpine Network for Education about the Mountain Environment), which brings together those responsible for environmental education in the French Alpine protected areas. The other Alpine countries were equally well-represented so that 1/3 of the participants were French, 1/3 Italian and 1/3 German-speaking (Germany, Austria, Switzerland). Most importantly, they were all very motivated!

The Prospects for the Group

Apart from the primary objective of meeting opposite numbers from other Alpine parks or reserves in order to exchange thoughts about their profession and their experiences, the aim of the meeting was to define together ideas on common actions and projects. The working group thus constituted confirmed its wish to begin collaboration on this theme on an Alpine scale within the framework of ALPARC.

The meeting made it possible to list various working directions and several ideas for actions or more developed projects: participation in the Phénoclim programme , setting up of common teaching tools, pooling of resources, think tanks on educational values ( Alpine identities, mountain culture …), work on the assessment of educational initiatives but also on the recognition of the educational mission inside the parks, etc…

It now remains to define priorities and a working schedule for the group who are notably going to use a collaboration space online which is in the process of being set up.

Education about the Mountain Environment, an Essential Mission of the Alpine Protected Areas

These exchanges revealed the feeling that there is a lack of consideration for the educational mission inside the protected areas (in most of the countries represented) in comparison with other missions such as research or scientific monitoring. This is often expressed by a lack of human and financial means.

It has become apparent, however, that education about the mountain environment is one of the essential missions of the Alpine protected areas. This is because enabling their inhabitants and visitors, young and old, to discover, feel and experience the mountains and Alpine nature (“educating through the heart and emotions”), is a vital first step towards the respect of this environment! The delegates therefore wished to give a reminder that environment education is a real tool in the protection of nature.

To Join the Working Group

If you are responsible for environmental education in an Alpine protected area, but were not present at this meeting, you can of course join the working group for the continuation of the work: contact marie.stoeckel@alparc.org